Skip to content
WHEN: Saturday, Oct. 1, 11 a.m.
WHERE: Hansberry Garden and Nature Center

Environmental education in Southeast Germantown will get a boost on Oct. 1, when Hansberry Garden and Nature Center accepts the gift of a Little Free Library from a local Girl Scout troop.

Troop 91224, composed of fourth- and fifth-graders hailing from the Germantown, Mount Airy and West Oak Lane neighborhoods of northwest Philadelphia,built the wooden structure, which will be mounted on a post outside the garden’s Hansberry Street gate. HGNC members will donate books on environmental topics to stock the free book exchange. 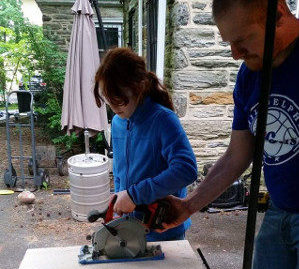 The troop undertook the project in pursuit of a Bronze Award, the first of a series of three community-service awards offered by the Girl Scouts. Eleven girls participated, mastering the use of carpentry tools including a circular saw and a nail gun under the supervision of Benjamin Blei, a master carpenter and contractor who is married to troop co-leader Beth Blei.

“We worked on it straight for about two months,” said Zivia Avelin. “I learned more about carpentry tools, and it was the first time I’ve painted something I’ve built.”

According to co-leader Sheila Allen Avelin, the troop had already completed a Girl Scout Journey – a smaller project calling for an action plan – focused on environmentalism. Their action was to create reusable shopping bags from used t-shirts. A store of the bags is kept at Sheila’s Mount Airy bookstore, Big Blue Marble. Anyone may borrow a bag – a useful service for shoppers at the nearby Weaver’s Way Co-op.

The Little Free Library will be dedicated at 11 a.m. on Saturday, Oct. 1, at the end of a community work session at the garden. Members are encouraged to bring environment-themed books to the event.